On the seventh anniversary of his election, UAE undermines the authority of the Yemeni President 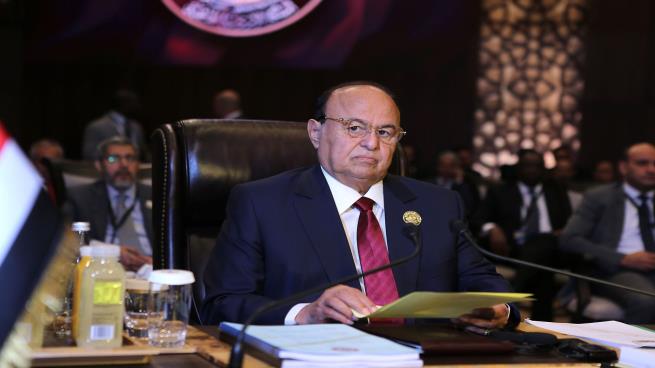 The UAE continues to undermine the authority of President Abdrabbuh Mansur Hadi by preventing him from returning to Aden, deploying armed militias that spread chaos and sabotage in the country without regard to the internationally recognized government.

Seven years after Hadi was elected as a consensus president through a process that was closer to a referendum than to an election, the countries’ circumstances and events prompted him to extend his presidency year after year.

The Yemenis’ opinions differ in their assessment of the situation in the era of Hadi and his situation, which has become weaker than ever in light of the obstacles, imposed by the Saudi-UAE alliance, on his return to the country and exercise his constitutional functions and steps specified in the transitional period.

Over the past two days, the anniversary of electing Hadi as a consensus president on February 21, 2012, in response to the initiative that led to the departure of his predecessor, Ali Abdullah Saleh, had a wide range of Yemeni discussions and comments on social media sites. It has turned into an occasion that once again highlights the status of the president, who remains in office as symbolic president of the internationally recognized authority of Yemen. His authority has in fact disappeared in the last four years, after the Houthi coup and the military intervention of the Saudi-UAE alliance.

Significantly, the occasion came with the least manifestations of any formal celebration, speech or a meeting, where might he deliver messages to his people on the latest developments and obstacles facing his years of rule and what he could do in the next stage.

Hadi’s election coincided with growing talk about his health. The Yemeni president spent the last two months of last year in the United States conducting medical examinations and monitoring his health with a heart valve disease.

After his usual medical visits to America, which usually takes days, he has grown taller than before. There were rumors about his recent visit to America claiming his death, which he had to answer with a video recording, confirming that he is still fine.

February 21 is not only Hedi’s election anniversary but on this date, he had launched a new phase of his presidency. he was able to leave the Houthi control areas in a situation that remains a mystery until today. He arrived in Aden, where he announced his withdrawal from resignation on January 22, 2015, under the pressure of the coupers who were besieging his home at that time.

And back to the Gulf initiative and its executive mechanism prepared by the United Nations, in light of which Hadi was chosen as president, he was supposed to remain in power for two years as a transitional period. But, the challenges he faced after assuming power extended the transitional period. The decisions of the Comprehensive National Dialogue Conference was the most significant event in the first two years of Hadi’s rule.

In January 2014, the Conference concluded with decisions to prepare a federal state constitution and to extend the transition until completion of the preparations. The coup came at the end of the same year, to stop the political process and move the country into a comprehensive war continues to this day.

One of the most striking manifestations of the weakness of Hadi’s authority, after years of war, was his failure to return to the city of Aden which the government announced it as a temporary capital, and it is under the control of the UAE-backed forces and the recent invasion of the alliance with Saudi Arabia.

Hadi continues to reside in Riyadh, without any logical justification for his presence with the symbols of legitimacy and most of the Yemeni officials outside the country, except the obstacles put by the Saudi-UAE alliance in the custody of legitimacy and make it at a weak stage. While the coalition uses the “legitimate” government as a cover for its intervention, it supports local secessionist parties and local tendencies in southern and eastern Yemen.

For many Yemenis, who reject the Houthi coup at least, Hadi remains a symbol of legitimacy regardless of the size of the failures that accompanied his reign, from the fall of the capital Sana’a by an armed group to a war that was unable to restore legitimacy and other manifestations of the catastrophic situation in the country.

The dark side of the UAE: torture, repression and above the law security apparatus

Constitutional and political chaos in the UAE