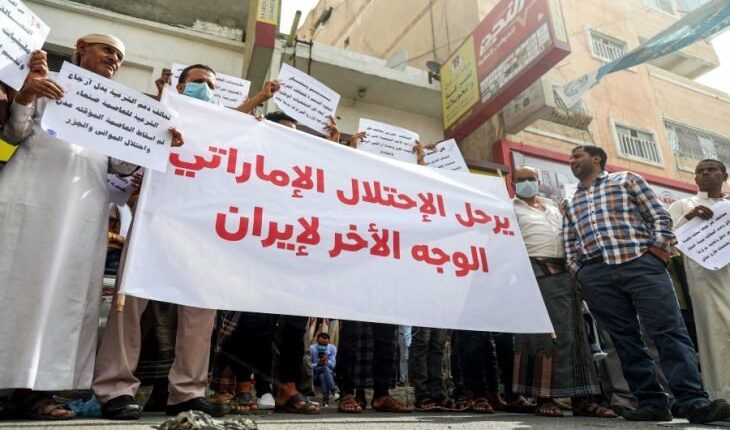 Calls for a popular uprising against the UAE escalated in the Yemeni province of Socotra, in refusal to Abu Dhabi’s occupation of the strategically located island.

Sheikh Issa Salem bin Yaqut, the leader of the tribes of the Yemeni province of Socotra, announced the start of a wider escalation against the Emirati presence in the province in southeast Yemen.

Yaqut called for an “uprising against the UAE presence in the vital archipelago located in the Indian Ocean, and the start of a peaceful escalation against the presence of the UAE forces in Socotra.”

He explained that “the peaceful sit-in committee in Socotra (a popular entity that rejects the foreign presence) will begin to escalate the stage of vigils against the presence of Emirati forces.”

He added that “members of the sit-in committee in Socotra are subjected to persecution and attacks, but this will not deter them from continuing the struggle against the presence of Emirati forces in Yemen.”

Yaqut attributed the reasons for the escalation to the deteriorating situation in the Yemeni governorate, saying: “Socotra is going through its worst phase, and the suffering of the population is increasing due to the control of the UAE and its tools.”

At the same time, bin Yaqut confirmed that the UAE had brought Israeli officers to the strategic island.

He explained that the UAE worked to bring foreigners to Socotra, and we made sure that they were Israeli officers.

Bin Yaqut said: “The men and sons of Socotra safeguard the Yemeni and Socotra identity in particular, and no one will be able to obliterate it.”

Two weeks ago, hundreds of residents of the strategic island of Socotra demonstrated in Yemen, demanding the departure of the UAE and its militias.

Activists on social media circulated scenes of hundreds of Socotra residents chanting about the departure of the UAE.