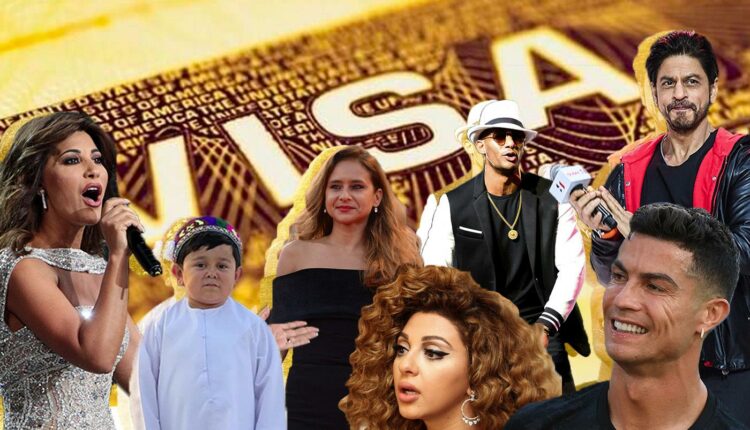 Yes, they are all famous and wealthy. They’re also holders of the United Arab Emirates’ coveted “golden visa”.

The allure for celebrities is clear: a 10-year renewable residency in a country that has become an influencer hotspot. For the UAE, too, it can raise its profile and present itself as a desirable destination.

But the growing list of famous figures handed the privilege seemingly due to their fame alone has stirred discontent in some quarters, particularly among Emirati women, who are unable to pass down citizenship to their children, and stateless Bidoon people in the UAE.

‘The UAE is free to attract foreign investment by extending Emirati citizenship laws, but it should end the gross discrimination regarding women and stateless groups’

– Sofia Kaltenbrunner,
International Campaign for Freedom in the UAE

The inequality is stark, says Sofia Kaltenbrunner,  campaign manager at the International Campaign for Freedom in the UAE, an organisation which campaigns for human rights and the release of political prisoners.

“The UAE is free to attract foreign investment by extending Emirati citizenship laws, but it should end the gross discrimination regarding women and stateless groups,” she tells Middle East Eye.

The UAE’s highly sought-after golden visa was introduced in 2019, as part of a drive to expand the entertainment industry and attract investment to the Emirates, targeting investors, entrepreneurs, chief executives, scientists and high achieving students.

The scheme was also introduced as an effort to acknowledge the cultural contributions of celebrities and actors, and has grown over the years.

Naturally, this visa is available to only a very select group of people. Around 90 percent of the UAE’s population is made up of expatriate workers, who must renew their work visas every two to three years, which can at times be a lengthy and complicated process.

In recent weeks, the gulf between the rights afforded celebrities and those given to women, Bidoon and expatriate workers has sparked criticism online.

On Twitter, the news of Tajik influencer Abdu Rozik receiving the visa drew hundreds of comments, some of which described it as unfair and called for a change of Emirati citizenship laws.

The 18-year-old social media sensation, who is known for featuring in rap videos, has 1.3 followers on Instagram, where he shared the news, alongside various other images of himself at Emirati landmarks.

Egyptian singer and actor Mohamed Ramadan took to Instagram last year to announce that he had been granted the visa, allowing him to stay and work in the country until 2030.

In the post, which garnered over 200,000 likes, he thanked the rulers of the UAE.

“Thank you to the rulers of Dubai, Sheikh Mohamed bin Rashed, may God preserve him, for the most beautiful gift of the golden visa. May God bless the rulers and the population,” he said.

Despite dissent being an offence punishable by prison in the UAE, prominent people are increasingly criticising citizenship laws.

Earlier this year, Sheikha Jawaher Al Qasimi, the wife of the ruler of Sharjah, took to Twitter to voice her opinion.

“These laws also vastly discriminate against the Bidoon population, who are entirely excluded from obtaining Emirati nationality, no matter how long they have lived in the UAE. Many Bidoon have spent all their lives on Emirati soil, and often have been there since before the creation of the UAE in 1971.”

The UAE’s nationality law makes children of Emirati men automatically entitled to citizenship, whereas children born to Emirati mothers and foreign fathers are not.

Emirati mothers have the option of applying for citizenship for their children if the child has lived in the UAE for six years, however the application process can take years. Children can also apply for citizenship when they turn 18.

Laura Van Waas, the co-director of the Institute on Statelessness and Inclusion (ISI), a human rights NGO dedicated to promoting the right to nationality and the rights of stateless people, says the UAE is one of 25 countries globally that have yet to guarantee women the same citizenship rights as men.

“Such discrimination runs counter to international human rights law and has a knock-on effect on the child’s enjoyment of other basic rights as well as on the family as a whole,” she tells MEE.

“The UAE also has an existing stateless population and discriminatory laws like this only serve to exacerbate the issue.”

According to Kaltenbrunner, the UAE’s increasing efforts to issue golden visas to social media influencers and celebrities is part of the country’s PR campaign to portray itself as a “modern, open and tolerant state”.

“In reality, the UAE is one of the most repressive states in the MENA region, with an estimated 200 political prisoners behind bars in the country. Many prisoners’ families have been stripped of their citizenship to intimidate them into silence,” she says.

That can lead to devastating consequences for prisoners’ relatives. Overnight, getting a job, earning a pension, education and even accessing healthcare becomes near impossible.

One example is the case of the late Alaa al-Siddiq, daughter of political prisoner Mohammed al-Siddiq.

Alaa gained asylum in the UK in 2018 after being driven out of the UAE following a campaign against dissidents in 2011-12. The UAE government stripped Alaa and her nine siblings of their citizenship in March 2016, after her father’s citizenship was also revoked.

She was outspoken on the fate of political prisoners and became the executive director for the ALQST rights group.

Devin Kenney, a UAE researcher for Amnesty International, said that he did not think the golden visas are to do with whitewashing, but rather a marketing opportunity.

“I think it is about the UAE’s desire to project a glamorous image by claiming famous, accomplished, or otherwise attractive people as Emiratis. Basically part of a branding strategy of the kind commonly used in marketing, only applied to a country instead of a product or company,” he tells MEE.

Although the UAE’s nationality laws do not apply to stateless people, the Bidoons’ status means that they fall mostly outside of the law, and are left unprotected by the laws of any state.

This means that stateless people in the UAE are unable to register births, marriages, acquire passports, renew a driver’s licence, access healthcare, education or even obtain death certificates.

“UAE laws should be brought into line with international standards on gender equality and granting nationality,” Kenny said.

“This means making transmission of nationality legally equal between men and women, and seeking to avoid any legal gaps that could cause people to fall into statelessness.”

Kaltenbrunner agrees. “It is time to end the glaring hypocrisy of UAE citizenship laws and recognise children of Emirati mothers and stateless groups as Emirati nationals on an equal basis,” she said.