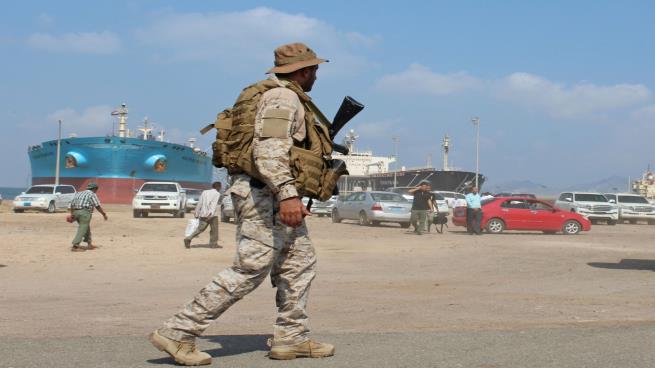 Ali al-Bajiri, a southern leader and a member of the Yemeni National Dialogue Conference, revealed that UAE forces in the country killed 32 Yemeni clerics and brought an Isis leader to Yemen.

Al-Bajiri said in a press interview that the UAE has brought a leader named Abu Bakr al-Zakhri from Iraq to Yemen to create a seed for the Islamic State organization in Yemen to use it as a pretext for maintaining its forces and military presence.

Abu Dhabi has killed 32 Yemeni clerics since its forces entered the country after the intervention of the Saudi-UAE alliance in March 2015 and have established more than 13 prisons and detention centers used to forcibly hide young people.

In response to a question about the UAE plans to create chaos thereby setting up bases for Isis and Al-Qaeda, Al-Bajiri replied: “Certainly. After nearly four years, the UAE plans in Yemen are known to all.”

“Everyone is aware that it – UAE – came to Yemen to destroy the state through the establishment of Yemeni regional and tribal belts, and the formation of militias loyal to it.”

He said in a related context: “The Saudi-UAE alliance today is a heavy burden on the Yemenis, especially after their colonial ambitions was revealed, and it turned out that their goal is limited to the dismemberment of Yemen.”

As for Saudi Arabia, he said that “the wise, old and experienced people who were running the policy of the kingdom some of them died and others were removed from the scene by planning and instigating from the Crown Prince of Abu Dhabi, Mohammed bin Zayed.”

He pointed out that bin Zayed did so “to control the Saudi decision and its administration, and there are many pieces of evidence at Yemeni level prove that.”

“I told the Saudis that Abu Dhabi was conspiring against them and against the Yemenis alike. And that they entered the field in accordance with a previous deal with, the deposed president, Ali Abdullah Saleh, to secure his and his family’s return to power in exchange for Aden and Socotra,” he said.

He added: “Abu Dhabi has also agreed with Saleh before his death to escalate the process of secession; by supporting some secessionist figures and raising the flag of the south,” which confirms the conspiratorial Abu Dhabi against Riyadh.

Devastation is the main scene in Yemen, nearly four years after the UAE began a war of aggression against the country as part of its main role in the military alliance that killed thousands of Yemenis and turned Yemen into the worst humanitarian crisis in the world.

Normalization escalates… UAE and Israel in a joint military exercise