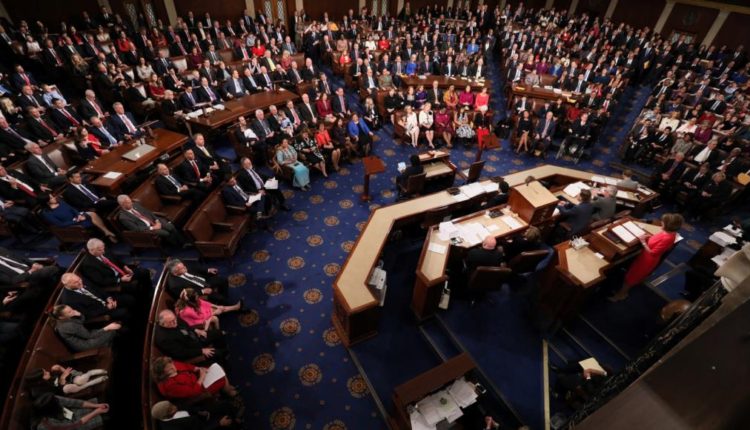 The US House of Representatives passed a majority bill to stop US military support to the Saudi-UAE alliance in the war in Yemen, where 248 members voted for the project, while 177 opposed.

The sponsors attributed the measure to the lack of a precondition for their prior consent to US participation in the war.

But the 248-to-177 vote would not suffice to overcome veto power that President Trump pledged to use against the resolution on war powers.

The Trump administration threatened to veto the law if it was approved, to keep up with lawmakers on policy toward Saudi Arabia and the UAE.

About two weeks ago, Democratic and Republican lawmakers put forward a resolution on the powers of war as a way to send a strong message to Riyadh about the humanitarian disaster in Yemen and to condemn the killing of Saudi journalist Jamal Khashoggi.

But Trump’s administration said the decision was inappropriate because US forces were providing support including refueling airplanes and not supporting combat troops.

The administration added that the measure would harm relations in the region and weaken the ability of the United States to prevent the spread of violent extremism.

The White House angered many members of Congress – Republicans – by failing to meet a deadline on Friday to report Khashoggi’s death last October at the Saudi consulate in Istanbul.

” It’s hard to feel any affection or some obligation to a regime that does that kind of stuff,” said Democratic Rep. Ed Perlmutter, a former member of the House, at a previous session of the House on the resolution.

Democrats regard the decision of the war authorities as a means of asserting Congress’s constitutional right to authorize the use of military force in external conflicts.

But Republicans opposed to the measure, like Trump, say support for Saudi Arabia is a security pact, not a use of force.

The decision by the US House of Representatives to increase strikes directed at the Saudi-UAE alliance after the cessation of the majority of European countries to sell arms to him and the withdrawal of a number of countries participating in it.

Morocco’s decision to withdraw from the Saudi-UAE alliance in the war on Yemen highlighted the severity of the crisis the Alliance is facing as the number of countries participating in the war has decreased and there are documented accusations of war crimes against civilians.

The “Arab Alliance” is no longer an Arab, especially with the escalation of international condemnation of violations committed by Saudi Arabia and the UAE in Yemen, as well as the sharing of quotas between the two Gulf states in the poor country.

Since the Alliance launched its military operations against the Houthi militia in Yemen in March 2013, it has been called the “Arab Alliance”, but this name has gradually begun to become limited to the name of the “UAE-Saudi alliance”.

It is not just a change of name, but the goal for which the coalition was founded “lost the road,” observers say. Instead of fighting Iranian-backed militias, Riyadh and Abu Dhabi have begun to “share quotas”.

However, a large segment of Yemenis has called the Saudi and Emirati intervention “occupation”, under the control of the two countries on decision-making and vital sources and economic Yemen.

Laboring the Saudi-UAE alliance is no longer limited to local media, international newspapers and websites are using the same term.

After three years of fighting that is not expected to end, amid international condemnation and wide-ranging human rights, the Arab alliance is turning into a Saudi-Emirati. Where are the rest of the participating countries?

States that have refused to participate for political reasons in the Middle East cannot be ignored: Iran, Syria, Iraq, and Algeria.

As the fighting continued in Yemen without a solution to the conflict that plunged the country into an unprecedented famine, the role of participating countries began to wane and others withdrew, with Saudi Arabia and the United Arab Emirates leading the way.

The Gulf crisis and the siege of Qatar is an important stage in the age of the controversial coalition. Doha announced the withdrawal its forces from the coalition, which estimated by one thousand soldiers, backed by dozens of military aircraft.

The last to withdraw from the coalition was Morocco, the “Associated Press” agency quoted from a Moroccan government official, on Thursday (February 8, 2019), that the Kingdom has stopped its participation in military operations with the coalition.

The Moroccan official said his country would not participate in military interventions or ministerial meetings in the Saudi-led coalition, adding that the Moroccan government had not disclosed details of the participation of its troops.

The Sudan, which has about 6,000 troops, according to local official sources, was subjected to popular pressure to withdraw from the coalition, after the deaths of more than 400 Sudanese, including 12 officers.

In May, Sudan’s Alahdath News website reported that “Khartoum has officially informed Saudi Arabia that it does not intend to renew its military forces, which are participating in the coalition, starting in June.”

With the frequency of many subsequent regional developments, including the Gulf crisis, the participation of Sudanese forces in Yemen has been besieged by a number of questions and accusations.

Some of the participating countries, such as Egypt and Bahrain, remained part of the coalition to register a political position that would ensure the satisfaction of Riyadh and Abu Dhabi and the continued support of the UAE-Saudi Arabia, especially economically.

As for Kuwait and Jordan, their role seems to be limited, or almost nonexistent, and this can be translated by limiting the Houthi response to Saudi Arabia and the UAE through rocket attacks and military operations within the two Gulf countries.

The coalition is being criticized by international political and human rights groups for targeting civilian, in the conflict with the Houthis and their ousted ally, Ali Abdullah Saleh, in addition to the role of the coalition in imposing a siege and closure on this country.

On September 5, 2017, the United Nations High Commissioner for Human Rights (OHCHR) said that human rights violations were continuing from all parties to the conflict in Yemen, in clear violation of international humanitarian law, criticizing the practices of the coalition.

In a long report on the humanitarian situation in Yemen since 2014, it said more than 4,500 coalition air strikes were recorded between July 2016 and June 2017, killing 933 civilians and injuring over 1,400.

During the same month, Human Rights Watch accused the coalition of exacerbating the humanitarian situation in Yemen through restrictions on access to basic commodities. The organization said it had increased the deteriorating of the situation for Yemenis and violated international humanitarian law.

In October of the same year, the United Nations listed the coalition as a blacklist of violators of children’s rights. The annual report for 2016 accused Saudi Arabia of killing and maiming children and of targeting and destroying Yemen’s schools and hospitals.

This is just the tip of the iceberg of violations condemned by the international community, which means that the alliance deviated from its course in fighting Houthis and restore the capital Sana’a from their control.

Two years after the start of the operations of Saudi Arabia and the United Arab Emirates in Yemen, the ambitions of the two economic countries have begun to emerge, through their control over the ports and cities that are Yemen’s economic outlet.

Saudi Arabia and the United Arab Emirates took advantage of their participation in the coalition to control the island of Socotra and the ports of Aden and Makhka, south of the country.

The two countries also established military bases on the southwestern island of Myon, adjacent to the Bab al-Mandab strait, which represents a strategic waterway for world trade.

The UAE is no longer hiding its ambitions on the Yemeni island of Socotra and is now under control after sending its fifth military plane last May, amid Yemeni demands to the UAE to leave, and revamp Abu Dhabi’s policy in Yemen.

As a sort of perception of the threat of Abu Dhabi in Yemen, a source in the Yemeni presidency revealed the movements of Saudi Arabia to establish three military bases belonging to it in different areas in southern Yemen.

Since the start of the military intervention of the Saudi-UAE alliance, tens of thousands of civilians have been killed in Yemen, which according to the United Nations has become the worst humanitarian crisis in the world.