Yemen: Pledges and threats to counter UAE conspiracies and militias 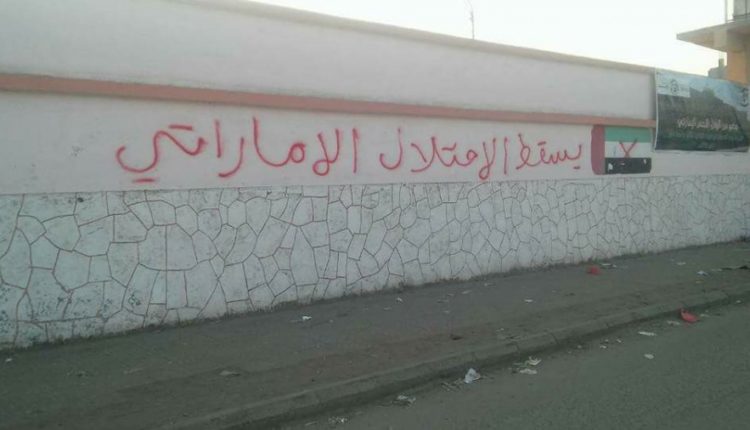 The commander of the first military zone in Yemen, Major General Saleh Mohammad Tamis, vowed to respond strongly to what he considered attempts to tamper with and destabilize the security of Hadramout Valley.

The warning issued by Tamis is the first official response to the statements of the President of the Transitional Council, southern Aidarus al-Zoubaidi, affiliated to the UAE, which called about two weeks ago to what he called the liberation of the region of occupation.

The commander of the first military zone that the Yemeni army forces will be on the lookout for all hands that will try to tamper with and destabilize the security in the Hadramout Valley.

He added that the members and officers of the region destroy all conspiracies in defense of unified Yemen.

Zubaidi, who leads factions seeking the secession of the south, announced the mobilization of the general military and the establishment of combat hubs in order to restore Hadramout Valley and expel the forces of the first military zone of Yemeni legitimacy.

While the UAE was able to establish “security belts” loyal to several southern provinces, including the interim capital Aden, authorities in other provinces have announced their refusal to establish any forces outside the framework of legitimacy.

On the other hand, Yemeni Airlines said that the Saudi-UAE alliance refused to grant permission to take off for flights to the cities of Jeddah and Cairo on Saturday and Sunday.

Yemen Airways expressed its surprise at the repeated cancellation of the alliance for flights, despite the knowledge of humanitarian cases, without giving reasons.

The Saudi-UAE alliance has refused to grant Yemeni airlines a permit for a number of flights during the past period without giving reasons, which caused heavy losses to the company, and also affected Yemeni passengers, most of whom travel abroad for treatment or study.

Meanwhile, the leader of the Houthis, Mohammed Al-Attili, threatened the Saudi-UAE alliance with what he described as “unexpected surprises,” stressing that his forces are in the final stages of re-preparing, developing and manufacturing various air defenses.

He added, in statements quoted by Saba News Agency owed by the Houthis, that the group developed missiles and aircraft armed march and missiles.

“We will surprise the arrogant aggressors of the Yemeni people with the surprises they will never expect,” he said.

But the leader of the al-Houthi group stressed that, with all its descriptions of achievements and qualitative successes, the group’s hand is still outstretched for peace.

For more than four years, Yemeni forces have been engaged in fierce battles between the Houthi group and allied forces on the one hand and the Yemeni army on the other, supported by an Arab military alliance led by Saudi Arabia and the United Arab Emirates.

The alliance and army forces loyal to Yemeni President Abed Rabbo Mansour Hadi are seeking to regain areas captured by the group in January 2015.

Yemen is suffering the worst humanitarian crisis in the world due to ongoing military operations. Thousands of people have been killed and wounded, according to the United Nations, and some 22 million people need humanitarian assistance and protection.

Yemenis are also concerned about the transformation of the Saudi-UAE alliance gradually into an occupation force aimed at pushing for the division of the country and the looting of its resources and capabilities, especially as a result of Abu Dhabi conspiracies.

The UAE regime is contradicting itself on the escalation with Iran

US official: UAE hostiles Muslim Brotherhood because they call for democracy and elections