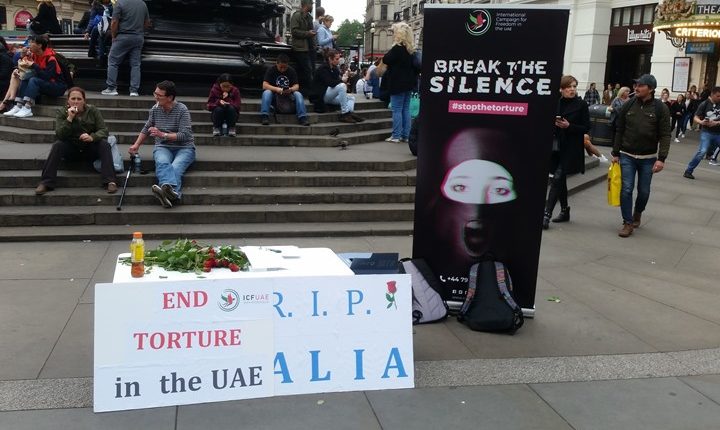 London (Reuters) – British activists staged a campaign in central London to hold a memorial service for the late detainee Alia Abdel Nour, who died earlier this month in the jails of the UAE regime by torture and medical neglect.

The demonstrators chanted slogans condemning human rights violations in the UAE and demanding public freedoms in the state and the release of all prisoners of conscience in the jails of the UAE regime.

Participants in the campaign, launched by the International Organization for Freedoms in UAE (ICF UAE), distributed roses to passers-by with leaflets explaining their case since their arrest in 2015 by UAE authorities until she died of medical negligence after suffering cancer.

A banner placed at a busy point in the Piccadilly Circus area has carried the title of the campaign, “Break the Silence.”

Under the title, “this rose comes with a heartbreaking story,” one of the publications explained. “On 4 May, Alia died and was confined to a hospital bed under armed guard by the UAE security forces,” said one of the campaign’s leaflets.”

“We are here today to commemorate Alia Abdel Nour, who died on May 4,” campaign coordinator Joe Odell said. “We are here to demand the UAE authorities to stop the mistreatment of detainees, especially the torture of detained women.”

Odell said Alia was denied access to medical care, and UAE authorities ignored calls from the United Nations, the European Union, and international human rights organizations for her release for health reasons.

“The UAE has declared 2019 a year of tolerance, not tolerating Alia, who was left to die in a hospital room,” he said.

Alia’s story began in 2015 when she was arrested for collecting donations to help the poor and women affected by the conflict in Syria, indicating that she was not aware that this simple act would bring her suffering.

Alia was arrested and subjected to torture and was threatened with the liquidation of her parents. Eventually, she had to sign documents without reading them, including confessions of collaboration with terrorist organizations abroad and then sentenced to ten years’ imprisonment, according to the campaign publication.

Alia’s story grew more dramatic with breast cancer months after her arrest. The UAE authorities refused to allow her to receive the necessary treatment. “the UAE even went so far and forced Alia to sign a document stating that she refused to receive treatment.” Four years after she was diagnosed with the disease, while the disease was spread throughout her body, only then was transferred to the hospital, a few months before her death.

Despite her poor condition, her family was prevented from visiting her regularly. “I went several times to the hospital, but the guards refuse to allow me to enter her room,” her mother said before her daughter died. “I used to stand in front of the door of the room, and hear her crying in pain, while I can do nothing to help her.”

In the last weeks of her life, the UAE authorities ignored calls for her release “and allowing her to die with dignity in her home.” The publication is concluded with: “Take this rose and remember Alia Abdel Nour.”

The British organization ICF UAE appealed to the UAE authorities in March to release human rights activist Ahmed Mansoor, a year after his arbitrary arrest in the UAE for his comments on social media. A group of British activists then held a protest vigil in front of the United Arab Emirates Embassy in London to denounce the anniversary of the disappearance of human rights activist Ahmed Mansoor forcibly.

The activists urgently called on the UAE authorities to find out where he was being held and to have a lawyer come to him to verify the legal proceedings against him during his enforced disappearance.

The organization said that it aims to pressure the UAE authorities to quickly release the renowned human rights activist and winner of the Martin Ennals International Award for Human Rights Defenders by conducting a number of events in London to uncover abusive practices by the UAE authorities against activists and Human rights defenders.