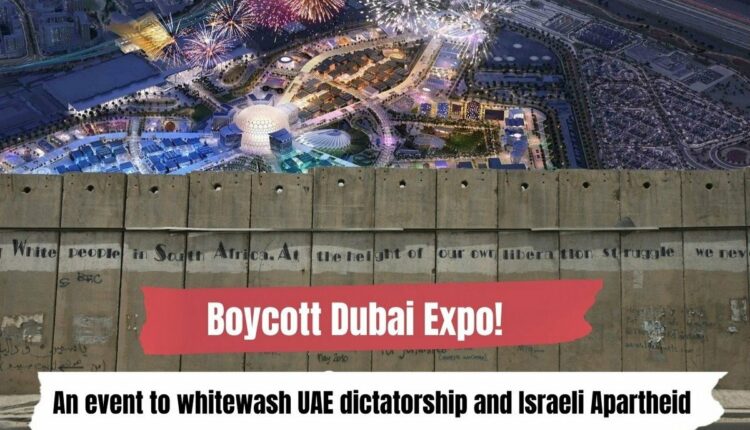 The Boycott, Divestment and Sanctions (BDS) movement has called on governments, companies and artists to boycott Dubai Expo 2020, which it says aims to “whitewash and distract attention from” Israel’s “grave human rights violations.”

In a statement posted on its website, the BDS said: “Both the UAE and Israel are shamelessly using the World Expo in presenting a “prettier face” to whitewash and distract attention from their grave human rights violations.”

The Dubai Expo is set to launch in October and will last for six months, with the participation of more than 191 states from around the world including Israel.

“The Israeli Pavilion at the Dubai Expo, led by the Israeli ministry of foreign affairs, has been welcomed like no other pavilion by the UAE dictatorship, in its scramble to find new ‘protectors’ of its shaky crown in the light of the precarious U.S. imperial presence in the region,” the statement continued.

Israel plans to use this propaganda pavilion to normalize and whitewash its system of oppression against Palestinians in front of an Arab and Muslim audience. With European colonial undertones from a past era, it is trying to market itself as the ‘glimpse of hope’ in the region.

Israel’s presence at the Dubai Expo comes a little over a year after the UAE and the occupation state signed a peace deal dubbed the ‘Abraham Accords‘ in Washington.

In response to the UAE and Israel’s continued rights abuses, the BDS movement has called for a boycott of all festivals, activities and projects sponsored by the UAE regime, including the Dubai Expo.