With elections looming, the exiled former Fatah leader's prospects of a return may be undermined by suspicions about his rumoured role in the UAE's deal with Israel 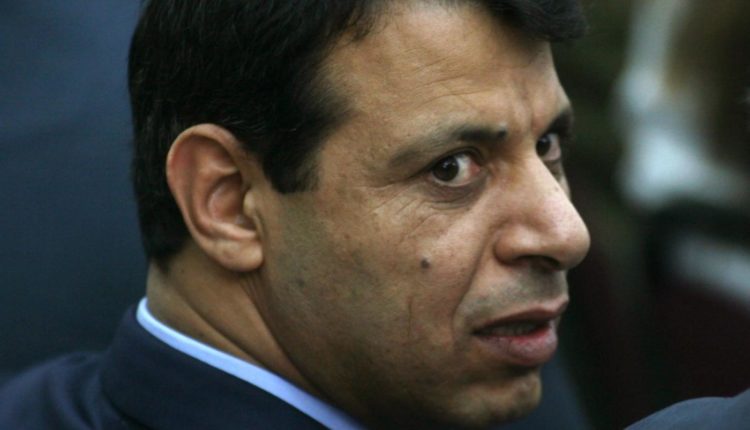 Mohammed Dahlan, the exiled former leader of the Fatah movement in the besieged Gaza Strip, has become a focus of Palestinian anger and accusations of treachery amid speculation over his role in the normalisation agreement between Israel and the United Arab Emirates.

‘His role in the Emirati-Israeli agreement does not strengthen him, rather it is a shame for him and revealed his true face’

– Abbas Zaki, a member of the Fatah central committee

Dahlan is an advisor Abu Dhabi Crown Prince Mohammed bin Zayed and has lived in the UAE since being driven out of the Israeli-occupied West Bank in 2011.

His close links to the Emirati leadership have led members of his former party to suggest that he may have been among the main architects of the agreement and prompted many Palestinians to wonder what he stands to gain from the deal.

Those suspicions have been sharpened by rumours of secret clauses and hints in the Israeli media about the prospect of Dahlan’s return to Palestinian political life.

Last week, Israeli newspaper Israel Hayom sparked controversy following an interview with US ambassador to Israel David Friedman, suggesting Washington was considering supporting Dahlan as the next president of the PA.

The newspaper later rowed back on the quote, saying it misquoted the American envoy – but the incident spurred questioning so soon after the Emirati normalisation agreement, especially after Dahlan’s first official statement following the UAE-Israel accord was carefully worded, avoiding any explicit condemnation.

Meanwhile, Dahlan’s movement said PA security forces had arrested half a dozen of his supporters in the West Bank in the wake of the deal.

Dahlan was later tried in absentia by a Palestinian court in 2016 and sentenced to three years imprisonment and a $16m fine over large-scale corruption in Gaza – charges his supporters have dismissed as “malicious accusations” stemming from a personal dispute with his former ally, 84-year-old Abbas.

Official Palestinian circles close to Abbas believe that Dahlan is “primarily responsible” for “engineering” the agreement between the UAE and Israel, claiming that he is driven by “personal interest”.

Special advisor to Abbas, Nabil Shaath, told Middle East Eye that he has no doubt that Dahlan played a major role in drafting and implementing the agreement, accusing him of seeking to strengthen his relationship with the rulers of the Emirates, preserve the “privileges” he enjoys as an advisor to Mohammed bin Zayed, and gain US-Israeli support for his return to Palestinian political life.

But for Shaath, Dahlan stands no real chance in Palestine after he “betrayed” his cause and acted against the interests of his people through his “blatant” involvement in pushing Arab normalisation with Israel – a move that has been denounced by many Palestinians as in effect giving an Arab green light to continued Israeli occupation, annexation, and violations of Palestinian rights.

Abbas’ advanced age, combined with the absence of presidential elections since 2005, has long led to speculation about who might be the next Palestinian leader – and the announcement on Thursday that longtime rivals Fatah and Hamas had agreed to hold parliamentary and presidential polls within six months has only prompted more questions.

Earlier this month, Dahlan wrote on Facebook: “I, Muhammad Dahlan, have a complete belief that Palestine urgently needs to renew the legitimacy of all Palestinian leaders and institutions, and this will only be achieved through comprehensive and transparent national elections.”

Dahlan has yet to publicly react to the news of fresh elections.

But allies of Abbas strongly dismissed the possibility that Dahlan could be a feasible candidate.

“If Dahlan returns, he will appear before Palestinian courts on charges of corruption and harming Palestinian national interests, and not to run in elections,” Shaath said sharply.

Abbas Zaki, a member of the Fatah central committee, had similarly strong words.

“Dahlan is a failure and a traitor, and he has no place in Palestinian life,” he told MEE. “His role in the Emirati-Israeli agreement does not strengthen him, rather it is a shame for him and revealed his true face.”

Middle East Eye sought comment from Dahlan through his lawyers in London on speculation about his role in the Emirati deal. It also asked whether he planned to stand in the forthcoming elections, but had not received a response at the time of publication.

But members of Dahlan’s Fatah Democratic Reform Bloc believe the criticism of their leader is being pushed by “the team that wishes to succeed Abbas”.

Mohsen said critics of Dahlan were afraid of his strength and popularity.

‘He cannot skip ahead, no matter how much external support he enjoys, as long as he does not gain popular acceptance’

“This team sensed a danger of some kind, and they believe that the American scenario that Abbas imposed on late President Yasser Arafat in 2003,” Mohsen told MEE. “But Abu Fadi (Dahlan) said explicitly ‘we will not return with an American parachute or an Israeli tank’.”

Dahlan succeeded in forming a popular base in Gaza, in part due to his origins from a refugee family displaced to Khan Younis refugee camp in the southern Gaza Strip.

Observers say he strengthened his position by reaching an “agreement of interests” with the erstwhile rival Hamas movement in 2017, forming a charity committee receiving Emirati funds.

Dahlan also enjoys the support of some other regional powers, most notably the governments of Egypt and Saudi Arabia. Dahlan’s connections enabled him to fund a number of charitable projects in Gaza, including mass weddings.

A recent poll conducted by the Palestinian Centre for Policy and Survey Research (PCPSR) in the West Bank indicates that Dahlan would only win seven percent of votes – one percent in the West Bank, 15 percent in Gaza – if presidential elections were held now without Abbas, who 62 percent of respondents said should resign, running.

The same poll indicated that 55 percent of respondents believed Dahlan was involved in the Israeli-Emirati agreement, with another 24 percent disagreeing.

However, Mohsen dismissed the credibility of the poll, saying fear of Abbas’ power has led many, including political and security officials in the Palestinian Authority, to conceal their loyalty to Dahlan.

But Hani al-Masri, the director general of Masarat, the Palestinian Centre for Policy Research and Strategic Studies, casts doubts on the claims of Dahlan’s followers.

“There are influential figures who have an actual presence within the Palestinian political scene and who are ahead of Dahlan in the race to succeed President Abbas,” Masri told MEE.

“He cannot skip ahead, no matter how much external support he enjoys, as long as he does not gain popular acceptance.”

And support from a significant cross-section of Palestinian society remains a stumbling bloc for the exiled politician, Masri said.

For Masri, reports of the US planning to install Dahlan at the head of the PA lack credibility.

“Washington realises that betting on him has failed in the past,” he said.

The UAE economy suffers a deep contraction of 5.2% during 2020