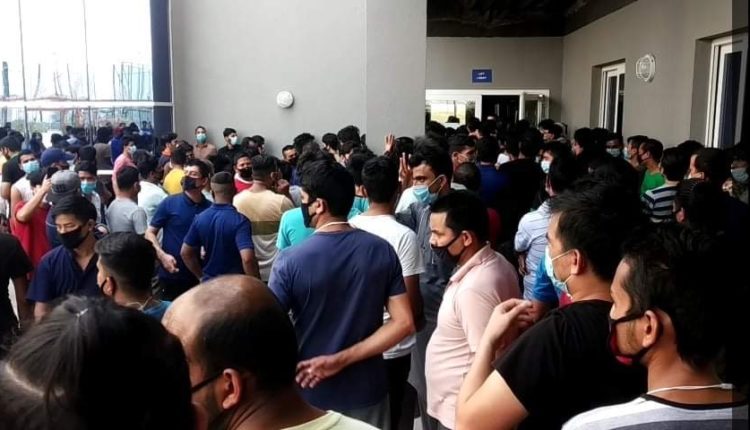 A large number of Nepali workers, who went to work in the UAE after paying hefty recruitment fees and other costs with the hope of improving their livelihood, are instead returning with large debts.

Santosh Dahal, 31, was happy when he found out that he got a job at Dubai International Airport.

Migrant workers from Nepal and other countries employed by Transguard awaiting their return home in a camp. These workers were arbitrarily terminated by Transguard even before their contract had expired. (Credit: Jayram Nepal)

“I also knew about the government rules and I told the recruiting agency about it. After being selected in the interview, I was told that I would get the job only if I paid the amount demanded. If not, the job would go to someone else,” said Dahal, who is originally from the hilly district of Dolakha. “I thought working at Dubai airport was a matter of pride. I didn’t want to let go of the opportunity. I agreed to pay the required money. After all, I had no other choice.”

Despite paying the hefty recruitment fee, he was given a receipt of only Rs10,000. His work permit, issued from the Nepal government, said he would be working for Transguard LLC.

“Even if the work permit came out in the name of Transguard LLC, the work will be at Dubai airport. The company is just taking the worker for now. The work will ultimately be at the airport,” Dahal remembers being told by the recruiting agency representative.

He arrived in Dubai on January 20, 2019. But he was not put to work for the next four months. Dahal was told that the work he would be doing at the airport had not started, so he would have to wait.

“They paid us a small amount of money in that period,” said Dahal. “Only after landing in Dubai, I got to know that Transguard was the company that supplies workers for Dubai Airport. Later, I came to know that I was not directly appointed by the airport. It was only after coming here that I came to know the difference between going through agents and getting hired directly.”

Transguard did not even pay Dahal the minimum wage stated in the contract he signed in Nepal.

“My position was a special handling agent. When I received my work permit, the contract said apart from food, I would be given AED1,200,” said Dahal. “The contract given to me in Nepal was not accepted in Dubai. Another work contract was made here. The new contract said my minimum salary was AED800, food allowance AED125, attendance allowance is AED80 and airport aviation allowance AED10o, so the total monthly salary was AED1,105. There was a difference of 400 dirhams even in the minimum wage.”

In the camp, he had to pay AED185 more than the allowance provided for food.

“We were not allowed to cook our food at the camp. We had to eat whatever was given at the camp irrespective of its quality. They would deduct AED310 from my monthly salary but we would get only dirhams AEd125 as food allowances,” said Dahal.

“When I asked about this to other workers they told me this is how it was. There was a complaint box at the workplace for submitting our grievances. I repeatedly dropped my complaints in the box, but nothing ever changed.”

“No one would work here for such a meagre salary. But we get some tips from customers. I have been working in hope of tips from generous visitors,” he said. “With the pandemic, I have lost that too.”

Dahal is not alone.

After the Covid-19 outbreak, a large number of Pakistani, Indian, and Nepali workers whose contracts had not yet expired were forced to resign and sent back home. Transguard had also sent a list of 2,479 names of Nepali workers to the Nepali embassy to initiate repatriation procedures.

“I only got to work 48 days. I couldn’t even recover the amount I paid for the job. I ended up taking more loans,” said Bhakti BK, who returned to Nepal on 31 July. “I had paid NPR85,000 as recruitment fees to River Overseas. I have not even paid half of the loan. I informed the human resources manager about my situation but he did not take any responsibility for this.” BK had reached Dubai on 7 January and worked as a trainee until 31 January. “My duty started on 1 February. The work had stopped since 18 March.”

Nim Bahadur Chhetri of Bardiya said that the workers were scared that they would not survive Covid-19. He had joined Transguard on 24 March 2019, after paying Rs 95,000 in recruitment fees.

“When workers were recalled from Dubai airport, the company management was not in favour of keeping workers and paying them. They threatened workers to keep them silent,” said BK. “It was the company’s responsibility to provide us with jobs as we had the contract for two years. Unable to provide a job, the company should have reimbursed our recruitment fees and given compensation before sending us back home. But, they made the situation far worse by giving us low-quality food that we felt happy just to return home.”

“It does not even provide the minimum basic facilities to the workers. Not even one percent of the food is of good quality,” said Jenny Shrestha, another worker who worked for the group. Dahal said that Transguard sent him without even paying the sick leave and gratuity amount.

“The company asked me to arrange the ticket myself and go back to Nepal. I took a Nepal Airlines ticket of NPR43,600 on 3 July and handed over a copy of the ticket to get my passport,” said Dahal. “Suddenly, I was called on 31 June and given a ticket for July 1 on a Fly Dubai flight. I bought the ticket on the advice of the company. I was not allowed to go on the day I bought the ticket but only on 1 June. I wasted my money on purchasing an air ticket. Instead, I was sent back empty-handed without being paid the 29-day reserved leave and one year’s gratuity.”

Workers who have not been able to return home are still staying in the camp. “We are living in a terrible condition. I could work in Dubai for only three months. The company terminated us without any information,” said Jayaram Nepal, who had reached Dubai after paying a recruitment fee of NPR55,000. “I have not been paid my salary last March. All we got was food.”

Andy Hall, an independent migrant rights specialist who has been assisting the affected workers, says the UAE Decree 279/2020 has had a devastating impact and left thousands of workers unpaid. “The unethical recruitment of Transguard workers, especially those recruited recently, alongside negative impacts of the COVID19 pandemic on job security and the decree, has led to an increasingly high-risk situation of forced labour and debt bondage amongst too many of these workers.”

Hall has been trying to engage with investors in companies like Transguard in the UAE, to raise awareness on “systemic forced labour and debt bondage in their labour supply chains because of their appalling neglect to prevent modern slavery and the lack of ethical recruitment and other practices by Transguard. It is taking time, but I am seeking remedies and repayment of fees to all impacted workers.”

Many companies in the UAE have failed to provide food or basic protective gear to their workers. According to workers, the UAE government was more concerned about protecting companies than workers even during the pandemic. The policy of ‘Early Leave’ is just one example of the UAE government’s inclination towards employers, they believe.

“Early leave” is a policy launched in April, which allows migrant workers to return to their home countries on unpaid leave and then return at a specific time determined by the worker and employer without contract termination, provided certain conditions are met.

Transguard, in response to workers expressing their protest online, claimed that it has been “proactively working with the Nepalese embassy” to repatriate an ‘idle pool’ of 3,100 workers. It also said that while it has repatriated over 5,000 workers to other countries, it has been particularly difficult with Nepal as the airport remained closed for longer periods. The company said it was paying for tickets of employees going on annual leave or have been ‘made idle’ but not those who have ‘resigned or been terminated as per UAE law’.

However, many workers MR spoke to say they were given no choice in the matter and were forced to submit resignations. The difference in being made idle and termination, and the associated legal obligations, are also unclear. Article 131 of the UAE labour law clearly states that the employer shall, upon the termination of the contract, bear the expenses of repatriation of the worker to the location from which he is hired, or to any other location agreed upon between the parties.

Migrant-Rights.org reached out to Transguard Group, seeking their response to these allegations. A spokesperson maintained that the company was in full compliance with the UAE labour laws.

Transguard is one of many employers failing to meet their obligations to workers.

A total of 44,000 Nepali workers have registered for repatriation at the Nepali Embassy in Abu Dhabi. The Nepali Embassy has facilitated their return home but has not been able to ensure refund of recruitment fees or any due wages and benefits.

Nepal’s Ambassador to the UAE, Krishna Prasad Dhakal, said that the embassy is repatriating workers in coordination with affected workers and employers. “We have been coordinating with employers and the host government to protect Nepali workers’ rights and ensuring that employers provide air tickets to workers if they want to return home,” said Dhakal.

A recent report by Nepal’s National Human Rights Commission (NHRC) has found that those who migrated after paying large sums of money at high-interest rates and have lost their jobs in the last few months are trapped in a vicious circle of debt bondage.

“Both source and host governments seem to have failed in reimbursing recruitment fees and relieving workers from the debt burden. Both sides do not seem to have paid enough attention to this issue” Sudip Pathak, a commissioner of the rights body. “Concerned agencies should facilitate access to justice of workers whose labour rights and human rights were violated by maintaining data of victim workers and evidence. For this, authorities of the destination country and the employers should be made accountable.”

This article first appeared on the Migrants.Rights.org