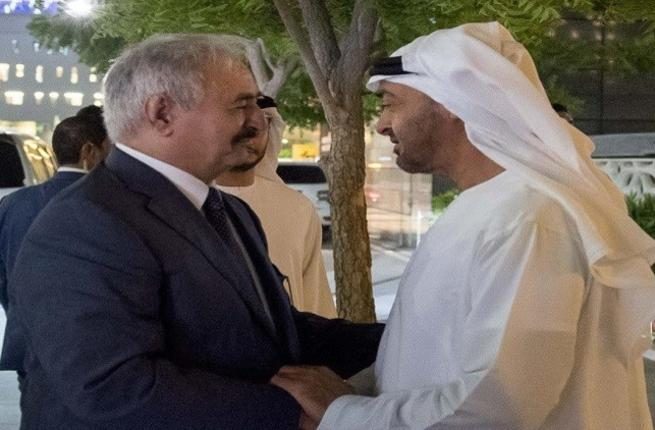 A new legal report published by The Independent says that the ally of the United Arab Emirates in Libya Khalifa Haftar is accused of war crimes, including killing civilians and mutilating corpses in the city of Derna in the east of the country.
Lawyers in London have revealed that the forces loyal to the Libyan military commander, who once had the support of the West, may have committed war crimes in the eastern city of Derna. Lawyers urged the International Criminal Court to investigate cases of torture, murder, and mutilation.
The legal report says this is the first time that Hafter’s forces have been formally charged with war crimes in the coastal city under his control since last summer.
The Geneva-based Human Rights Solidarity organization, which has prepared this report, plans to present it to prosecutors at the International Criminal Court in the coming weeks.
The human rights lawyer Rodney Dickson of Temple Garden Chambers reached this conclusion after studying several videos and photographs taken in Derna and published on the Internet, claiming that Haftar’s Libyan National Army shot unarmed civilians, mutilated corpses and carried out indiscriminate shelling of residential areas.
Rights groups have repeatedly accused the Libyan National Army, which controls areas of land in eastern and southern Libya, of committing war crimes in cities such as Benghazi.
In July, the International Criminal Court issued a second warrant for the arrest of Mahmud al-Warfali, the commander of the special forces of Haftar, after several videos appeared on the Internet showing that he had killed imprisoned fighters.
However, the new report now highlights allegations of abuse in Darnah.
“This evidence appears to depict the commission of the war crimes of murder, mutilation, torture, cruel treatment, outrages upon personal dignity, and the targeting of civilians,” the report said
In another section, the report states that “It is imperative that the perpetrators and their commanders should be investigated to obtain all available evidence so that those responsible can be brought to justice.”
“These investigations should be undertaken by the ICC which has jurisdiction over the Libya situation if no genuine domestic investigations are underway,” it added.
The Solidarity for Human Rights organization, which also investigated the actions of opposition forces in Haftar and resident in Tripoli, confirmed that the United Nations and the media failed to shed light on rampant abuses committed across the country.
“This marks the first legal opinion which will be submitted to the ICC of the widespread abuses in Derna. General Haftar’s forces have been accused of potentially committing crimes with the siege, but this report reveals there are many more abuses,” said Ahmed Algaseer, the group’s senior rights researcher.
Haftar has led the Libyan National Army since his return to Libya in the spring of 2011 from his exile in the United States. Despite growing evidence of ill-treatment, in the past few years, he has been summoned by many countries including Italy, France, Russia, and Egypt as a key player and potential leader in Libya.
For years, he has been loyal to a rival government in the eastern city of Benghazi opposed to the UN-recognized government in Tripoli, but in 2017 he agreed to an alliance with Prime Minister Fayez al-Sarraj to help hold national elections.
In June last year, his forces took control of Derna, which was under the control of an al Qaeda-linked group, after he imposed a siege on the city and prevented aid from entering and families returning to their homes.
In November 2017, Human Rights Watch revealed that armed groups loyal to Libya’s national army may have executed up to 36 men in the town of Abyaar, about 30 miles east of Benghazi. In February last year, the organization said that the return of displaced families to Benghazi had been prevented.
The new report mentions several incidents that could amount to war crimes, including an incident that was filmed using a cell phone showing unarmed civilians in Derna being repeatedly fired on the ground, even after they appeared to die.
In other sections, the bodies are mutilated, suspended from automatic machine-gun towers and placed on drilling machines, which the report also describes as an attack on personal dignity.
The report also reported several other videos showing shooting at civilians and forcing victims to remove their trousers before being executed.
Haftar has repeatedly admitted receiving support from Cairo and Abu Dhabi in his war against Libyan rebels who ended a 40-year rule of Libyan leader Muammar Gaddafi with a fist of iron and fire, the Libyans say.
Observers believe that an independent international inquiry with war criminal Haftar will reveal the involvement of Egyptian and Emirati figures at high levels in both countries in these human rights crimes as Abu Dhabi supported the Haftar attack on the city and continued a propaganda campaign accusing its trapped population of being terrorists.

Hundreds of paintings in the yacht of UAE’s brother ruler