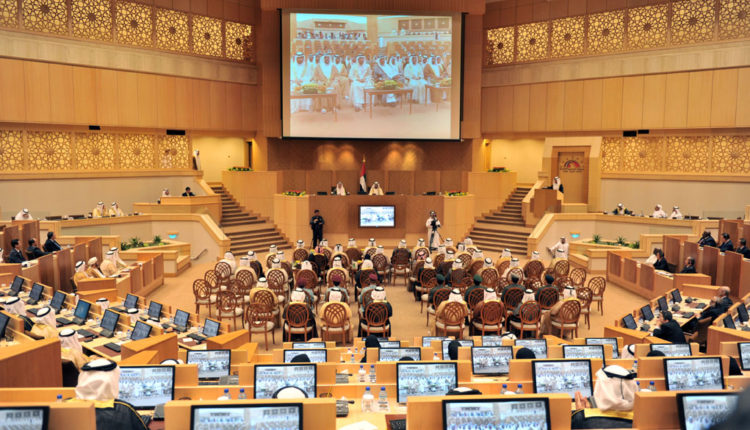 The Federal National Council (FNC) celebrated its 47th anniversary on February 12, amid signs that the council represents the rulers, not the Emiratis.

Since its establishment, the FNC went from bad to worse. It is no longer a parliamentary body that represents citizens as much as it represents the authorities, which makes it absent from its role in decision-making and future building in UAE after being present in the early years of its establishment.

The FNC was established along with the establishment of the Union as the representative of the UAE people voice in the seven emirates. And in its hot meetings at the establishment to discuss all the problems and needs of Emiratis and political and economic problems, the deterioration of the Council, which has become a tool only to improve the authority of the security services.

Although the FNC has no legislative or supervisory powers, its role comes as a consultative authority, but within its competence: “passing, amending or rejecting federal draft laws including financial bills, examining the Annual General Budget draft law and the draft law of the final accounts, discussing international treaties and agreements and discussing general subject pertaining to the affairs of the Federation and offering recommendations.”

However, the FNC does not discuss either of these two subjects, although the first concerns reviewing the disbursement of “public money” and “the state revenues.” However, the council usually discusses what the government is asking to discuss, not the other way around.

What shows that is that the international reports cause local outrage from mosques surveillance, preventing citizens and residents from performing acts of worship without supervision, depriving freedom of assembly in the mosque, or offering a sermon to worshipers without the prior permission of the State Security Department.

In contrary to what is required of the FNC, to raise the concern of citizens with the government and the security services, in January the FNC called the State Security Department to put “all the mosques of the UAE!” under surveillance.

In November, government officials announced that the number of voters will increase in the upcoming elections. In the first elections in 2006, only one percent of Emiratis were allowed to participate in elections and candidacy, according to lists prepared by the State Security Department, and in elections, the lists were the same without expecting additions which were less than 10%.

Despite the government’s promises, the president’s decision, early this year, did not mention an increase in the lists to compete for half the seats in parliament. Instead, a publicity decision was issued that women should take 50 percent of the seats in an effort to improve reputation rather than the election process or the status of the FNC.

The observer of the UAE experience believes that the political decision maker in the country ignored the people and their opinion, and deprived them of the important decisions affects their lives. the citizen who is supposed to be the source of legislation, not foreign advisers.

The Parliament, adopts all countries that recognize the importance of their people and the necessity of their participate in decision-making, in exchange for their responsibility in taxes, fees, etc., because they realize that governments that are subject to the will of their people and express their pain and hope and share them in good and bad are stable governments Prosperous at home and strong and respectable abroad.

According to a public opinion study published in the official press in 2010, 79 percent of UAE citizens want a full-fledged federal council, but the state’s ruling system has ignored these demands and used the FNC as a tool to improve its reputation.

That means that the gradation in political work will lead to a national council, parliament, with full powers and was elected by all the people.

Although most Emiratis have a vast political culture, both internal and external, the size of their participation and the powers of their federal council are disproportionate to this awareness.

The Federal Council and its powers need real reform to include the full participation of all Emiratis to elect all the members of the Council within the full constitutional powers, a call made by UAE activists and intellectuals, lawyers and state officials in a petition submitted to the President in 2011. But, the response was arresting dozens of signatories, targeting them, distorting their reputation and excluding them, in the campaign continued from then until today.

The UAE tightens its grip on an Emirati fled abuse

New evidence: Weapons of Yemeni militias accused of war crimes will be presented at Abu Dhabi