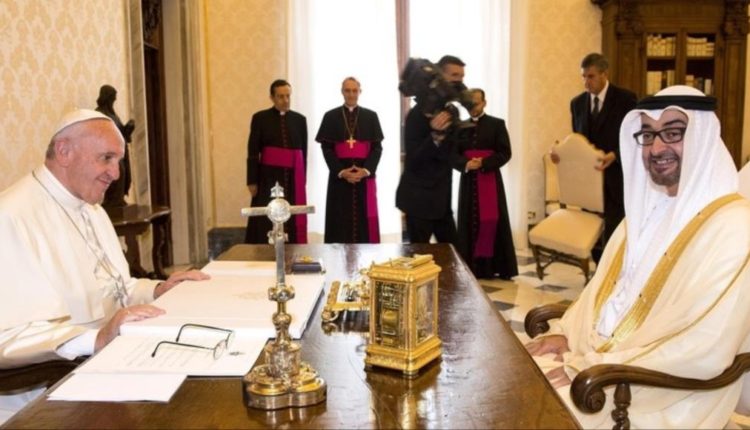 Amnesty International has called on Pope Francis to address the issue of human rights defenders detained in the UAE and call for their unconditional release.

The Human Rights Organization said in a statement that the UAE authorities are trying to describe the year 2019 as a year of tolerance, and use the visit of the Pope as evidence of diversity respect. However, the organization wondered whether that meant that the authorities were willing to abandon their policy of systematic repression of dissidents and critics.

Amnesty said that it takes more than just symbols to polish the human rights record that is described as horrific in the UAE. The authorities have launched an attack since 2011 on all those who criticize it, including activists, judges, lawyers, academics and journalists, through arbitrary arrest, enforced disappearance, torture and ill-treatment.

Dozens of activists and human rights defenders gathered outside the Vatican City in Rome to protest the “massacres” committed by the Saudi-Emirate forces in Yemen.

This event comes on the occasion of the upcoming visit of the Pope to the UAE, the country that participates in the war in Yemen, causing the biggest humanitarian disaster in the world.

The demonstrators called on the coalition forces to stop the killing of Yemeni children and civilians, denouncing the humanitarian situation in Yemen, which has made the country’s people on the brink of death due to famine and disease.

Earlier, the head of the National Committee for Human Rights in Qatar, Ali bin Samih al-Marri, met last Thursday with the Pope and called for urgent humanitarian action in favor of the victims practiced by the siege countries against Qatar.

Al-Marri told the Pope about the complaints and suffering of thousands of  separated families and students expelled from their schools due to the continuation of the siege imposed by the UAE, Saudi Arabia and Bahrain as well as Egypt to Qatar since 5 June 2017.

For its part, SkyLine International said that the visit of Pope Francis to the United Arab Emirates should demand that Abu Dhabi stop violations of privacy breaches of individuals and espionage and penetration on the Internet and social networking.

In a press statement, the Stockholm-based human rights organization urged the Pope to address the widespread violations of privacy, espionage and infiltration against citizens and expatriates in meetings with UAE officials.

The International Foundation confirmed that the first visit to the Gulf states by the UAE is an opportunity to highlight the ongoing crackdown on freedom of expression in the country, which requires Pope Francis to raise the issue of human rights defenders imprisoned in the UAE.

It stressed that attempts by the UAE to consider the 2019 Year of Tolerance and its attempt to exploit the Pope’s visit to emphasize its respect for diversity must be accompanied by immediate measures, including the release of prisoners of conscience and the granting of public freedoms and peaceful opposition.

Since 2011, the UAE authorities continue to suppress its opponents and critics, including activists, judges, lawyers, academics, students and journalists, through arbitrary arrests, enforced disappearances, torture and other ill-treatment.

Skyline International also demanded that the pope raise what the Reuters news agency revealed about a group of former US intelligence agents spying for the UAE in the so-called Raven operation.

Reuters published a report saying that the sophisticated spy device “Karma” has enabled the UAE to monitor hundreds of personalities since 2016, and at the top of the target was the Emir of Qatar Sheikh Tamim bin Hamad al-Thani and his brother and a number of close advisers.

Skyline has revealed in a previous report that the UAE has recruited international Internet hackers to penetrate regional and international institutions and websites, activists and journalists.

The Pope will be in Abu Dhabi on Monday (February 3rd) for a religious meeting with Sheikh Ahmed al-Tayeb and representatives of other faiths, before presiding over a football stadium in the UAE capital, ahead of a gathering expected by local newspapers to be the largest in the history of the Gulf state.

The Pope’s visit to the UAE comes as the country faces criticism from human rights groups for its role in the war in Yemen where thousands of civilians have been killed and accused of pursuing human rights activists.

On December 31, an Emirati court upheld the detention of a human rights activist Ahmed Mansour for ten years for criticizing authorities through social media.