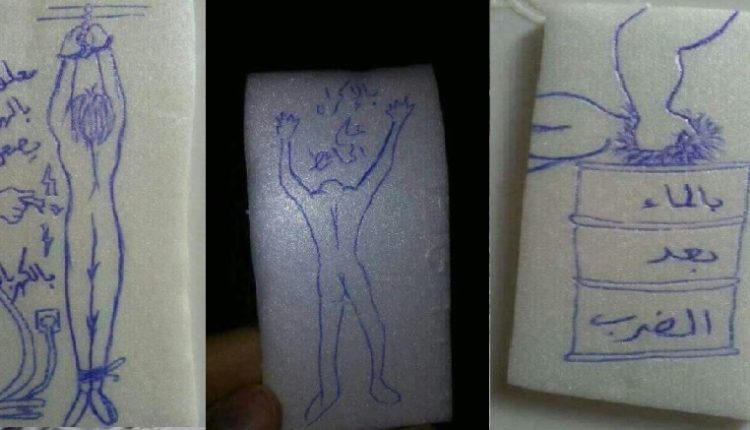 Bir Ahmad’s prison in the Yemeni capital of Aden is one of the most controversial prisons supervised by the UAE forces in Yemen. Some Yemenis are calling the prison “Abu Ghraib” due to the nature of the immoral violations practiced in the prison.

The Abu Ghraib prison, west of the Iraqi capital, Baghdad, was famous for its ill-treatment of prisoners during the American occupation of Iraq. Pictures were leaked showing ways of torturing Iraqi prisoners, humiliating them and photographing them and stacking them naked by American soldiers.

The incident was called “Abu Ghraib scandal” where 11 US soldiers were involved in the scandal and ended up closing the prison. Inmates of the Bir Ahmed prison are facing the same by the UAE jailers and their assistants.

In mid-2017, Associated Press reported a network of secret prisons of at least 18 Yemeni-run prisons in southern Yemen, including the prison of Bir Ahmad, where drawings were published revealing torture methods against detainees.

Human rights reports indicate that there are more than 150 detainees inside the prison, including 62 detainees without files, have not been interrogated for two years, and 4 detainees who have become mentally ill because of torture.

There were different reactions to this scandal, as the detainees began a hunger strike in conjunction with the continuation of the activities for the protest of their families, especially in Aden and Mukalla, where there is a secret prison at Al Rayyan International Airport, which the UAE takes a military base. The American “Daily Best” revealed violations against detainees there where detainees are thrown in freight containers and left them at temperatures above 50 degrees Celsius.

Human Rights Watch said the hunger strike launched by dozens of detainees in the Yemeni capital of Aden highlights the ill-treatment of prisoners throughout Yemen.

Amnesty International accused the UAE and allied Yemeni forces of torture of detainees in a network of secret prisons in southern Yemen, calling for an investigation into these violations as war crimes.

The organization called on the UAE to stop the arrests of civilians in Yemen and to refrain from running prisons and prisons outside the supervision and authority of the judiciary, which is a crime that should be held accountable and not subject to the statute of limitations.

The position of the Yemeni government

In contrast, the Yemeni government formed a fact-finding committee, while the Yemeni Interior Minister recorded a double position that began with the attack on the UAE and called for closing the secret prisons and subjecting them to the prosecution and then revoking it after a period of confirmation that the prisons are subject to Yemeni supervision after returning from a mysterious visit to Abu Dhabi.

While the UAE denied this as a charge of trying to discredit the Arab alliance, which “seeks to save the Yemeni people,” according to the expression of the UAE Foreign Ministry.

Abu Dhabi tried to improve its image after the scandal, allowing the International Committee of the Red Cross (ICRC) in early 2018 to visit Bir Ahmed as the first visit of an international organization to a detention facility under the supervision of the UAE in southern Yemen.

President of the Geneva-based SAM Human Rights organization, Tawfiq al-Humaidi, described the Bir Ahmed detention center in southern Yemen as “a notorious and a dark prison that the UAE created to humiliate the Yemenis and practice all kiles of torture on them.”

Al-Humaidi explained that the organization issued a special report on the prison in April 2018 in which human rights violations were documented, including physical harassment and torture of electricity and death and loss of visits.

Al-Humaidi pointed to the testimony of the leader of the resistance, Adel al-Hassani, who revealed a part of these methods, practices, and violations in this prison in an interview with Al-Jazeera.

Al-Hasani revealed in the program “Without Borders” on Al-Jazeera in December 2018 that mercenaries from the notorious, American company Blackwater, run an Emirates prison in Yemen, noting that he saw slogans of the company on the clothes of some jailers inside the prison of the UAE Aden.

“For some time, this prison has become the focus of international organizations and the media, which have shed light on the suffering of detainees in this prison and, strangely enough, many of those arrested in this prison do not know why they were arrested and tortured,” Hamidi said.

He added, “but unfortunately, after the visit of the Minister of the Interior to the UAE, the minister returned and declared a statement completely contrary to his previous one. He also said that these prisons are run by the Yemeni authorities, to put all the blame on the Yemeni government.”

“After the report of the distinguished panel of experts of the Human Rights Council, this prison has become a shrine and a focus of attention and will lead criminals to international and domestic judicial jurisdiction soon,” he added.

Al-Humaidi pointed out that this prison will lead all those who committed violations to behind bars to obtain a fair punishment.

“This prison is now a symbol of a period or era that will not be forgotten by the Yemenis, an era that is documented in the minds of detainees, international reports and the media,” he said.