Israel expects economy recover due to billions of UAE investments 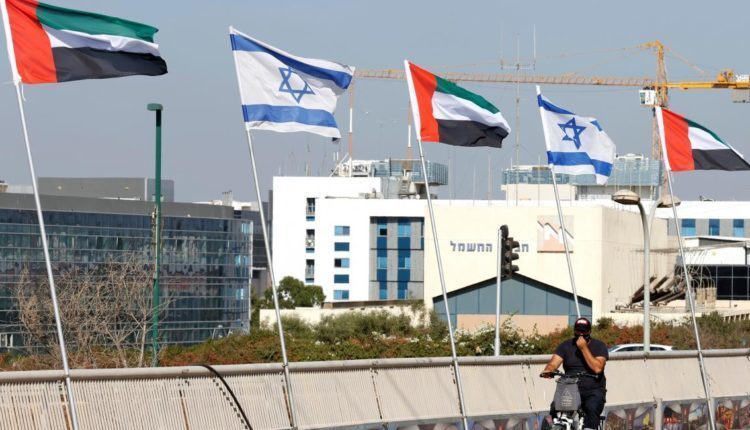 Similar economic reports in Israel expect economic recovery due to the UAE’s billions of investments, as a result of the normalization agreement between the two countries.

Israeli economic reports expect that the UAE will invest in the Israeli market in a way that will contribute to improving Israel’s economic conditions, especially investing in advanced technology projects.

The pace of economic, commercial, banking and investment normalization between the UAE and the Israeli occupation state is accelerating after the announcement of an agreement to normalize political relations.

Emirati and Israeli banks have entered into partnership talks, and a delegation of major Israeli banks is preparing to visit the UAE within days to agree on banking projects and activities that may lead to the establishment of joint banks, the opening of branches of Israeli banks in Abu Dhabi, and the financing of investment projects and deals.

A number of Israeli and Emirati companies have already signed agreements immediately after the announcement of the agreement to normalize relations, including banking, tourism, aviation and technology sectors.

The decision of the President of the UAE, Khalifa bin Zayed Al Nahyan, at the end of last August, to cancel the boycott of Israel law, allowing for commercial, financial and other agreements to be concluded with Israeli bodies or individuals, opened the door to major economic cooperation between the two countries.

“The UAE has excess amounts of money, but not enough places to invest it in the Middle East,” said Eldad Tamir, founder and CEO of the Tamir Fishman investment house, one of Israel’s top investment funds.

“The high-tech sector here is thirsty for money and having new investors from the UAE will help us diversify a bit from our usual Chinese and American investor,” he added.

It is scheduled that two delegations from the two largest banks in Israel will head to the UAE soon to establish financial relations under the normalization agreement between the two sides, which was announced last month under American auspices.

Reuters reported that the Israeli heads of Bank Hapoalim and Leumi will head to the UAE this month, the first of its kind visit.

A delegation led by Bank Hapoalim will leave on the eighth of September, to visit Abu Dhabi and Dubai, where it will meet government and commercial officials, as well as the heads of major banks in the UAE.

Bank CEO Dov Kotler described the visit as a “unique opportunity to establish economic relations and cooperation between our two countries and their financial systems, which will achieve economic growth for both sides.”

He added that there is an “urgent bilateral desire” to establish strong economic relations.

The second delegation is headed by the CEO of Bank Leumi and will visit him on September 14th. The bank said it hoped the diplomatic agreement would pave the way for cooperation in the financial, technology, health, tourism, agricultural and industrial fields.
First Abu Dhabi Bank said last week it would initiate discussions with Bank Hapoalim and Leumi.
Last August, the UAE and Israel announced an agreement of normalization. And last week, they agreed to form a joint committee for cooperation in financial services with the aim of supporting investment between the two countries.

Two days ago, the Foreign Policy, said that Israel is about to play a much larger role in energy trade and oil policy in the region, after the UAE’s agreement with it strengthened a pipeline that was secretly built between Israel and Iran.

The magazine stated in a report that the “desert oil pipeline that Israel once operated as a secret joint venture with Iran could be a major beneficiary from the Trump-brokered peace deal with the United Arab Emirates. With the UAE formally scrapping the eight-decade Arab boycott of Israel—and other oil-rich Gulf neighbors likely to follow suit—the Jewish state is on the cusp of playing a much bigger role in the region’s energy trade, petroleum politics, and Big Oil investments.”

Managers of the Asia Pipeline Company that manages the pipeline say that the 254 km canal from the Red Sea to the Mediterranean provides a better and cheaper alternative than the Egyptian Suez Canal and an option to connect to the Arab Pipeline network that carries oil and gas not only to the region, but to the seaports that supply the world.

The magazine quoted Isik Levy, CEO of Asia Pipeline Company, that this pipeline opens many doors and opportunities, and can reduce a large share of the oil shipments that now flow through the nearby Suez Canal.

The report said that the advantage of this line over the Suez Canal is the ability of the terminals in Ashkelon and Eilat to accommodate the supertaskers that dominate the shipment of oil today, but it is too large to accommodate the canal, and the company’s work has always been one of Israel’s closely guarded secrets.

Foreign Policy pointed out that although much of the hype around the UAE-Israel agreement focused on other sectors such as technology, healthcare, education and tourism, the Eilat Ashkelon pipeline puts the deal in the world of petroleum, the beating heart of the Gulf economy.

She added that the opportunities for Arab-Israeli energy deals are now wide and profitable, starting from investing in the Israeli pipeline itself, to adapting it to transport natural gas or connect it to pipelines across Saudi Arabia and the wider Middle East.
Mark Sievers, former US ambassador to Jordan, said if the Jordanians do partner with Israel, there is enormous potential for all kinds of businesses.

In 1956, the Eilat Ashkelon pipeline, when it was built, was a massive project aimed at ensuring energy supplies to Israel and Europe in the wake of the Suez Crisis. Most of the oil flowing through this pipeline came from Iran, which had close but secret relations with Israel for decades before the Iranian revolution.

An Official Emirati Delegation to Visit Israel within Days