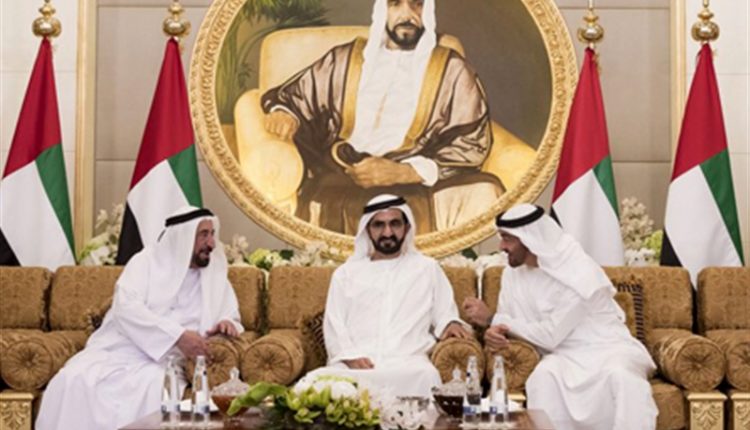 New indicators in the UAE highlight an unprecedented upsurge in internal disputes between the rulers of the UAE and the beginning of an undeclared rebellion against the de facto ruler of the country, Mohammed bin Zayed, because of its foreign policies.

Recently, the absence of Sultan bin Mohammed Al Qasimi, member of the Supreme Council and Ruler of Sharjah, for an expanded meeting of the seven emirates’ rulers in the rare presence of President Khalifa bin Zayed, has been noticeable.

Al-Qasimi missed the meeting without any official justification, despite the presence of the members of the Supreme Council of State, Crown Prince and Vice-Rulers and a number of other sheiks of the state.

Al-Qasimi absence was present in the minds, comments, and questions of the Emiratis which led them to to the conclusions that touch the reality.

It is not possible to hide the large disparities and clear differences in the policy of the ruler of Sharjah and his national positions, which he expressed more than once, either with letters, decisions or practical orientations and agendas. In return the policy practiced by Abu Dhabi after the absence of its governor because of illness, it has been said that it began since 2014. After years, the Emiratis was surprised to see their president exhausted with illness without knowing the reasons.

The absence of the President and Ruler of the Emirate of Abu Dhabi coincided with Abu Dhabi support for the coup in Egypt and spearheading the regional scene the counter-revolution and the so-called war on terrorism. The same time a large sector of Emiratis refuse to consider the absence of the head of state and existence of these roles is by coincidence.

Emiratis say that since 2014, the executive branch has become cruel, specifically the one who has been in power in the absence of the ruler of Abu Dhabi. The security apparatus ask has become cruel, even though it began after the death of state founder Zayed bin Al Nahyan.

Throughout the president’s illness, Abu Dhabi’s policy has led to the isolation of the state, even if it thought that it has power and influence. The Arab and Gulf citizens see in Abu Dhabi one of the threats imposed on him without warning.

The name of the UAE was associated with the American Deal of the Century to liquidate the Palestinian cause, the accelerated and orderly normalization with Israel, and other files related to Arabs and Muslims and their sanctities, as well as the executive authority control over all aspects of the UAE and the UAE people.

All this, in particular, the Deal of the Century collides clearly and directly with the deep intellectual and religious vision and authentic nationalism along with the national roots striking UAE values that characterized the ruler of Sharjah, making it very difficult to accept them as well as be part of them.

The ruler of Sharjah granted the UAE citizens great rights that did not exclude anyone including the weak, the poor, the widows, the women, the children and the marginalized. He increased the benefits of its citizens’ material and moral rights. However, Abu Dhabi and other emirates did not offer such interest, rights or privileges. Emirates saw a decline in benefits and rights, especially in the Emirate of Abu Dhabi, by reducing the benefits of education and health for employees, as well as rising prices for services and more.

There are more differences to tell between the positions of the Ruler of Sharjah and other leaders in the State, especially in the Emirate of Abu Dhabi.

Among the important issues, which he believes deepen the differences between Sharjah and Abu Dhabi, are Abu Dhabi’s policies towards Turkey, specifically about Turkish President Erdogan.

It is no secret that since 2014, too, Abu Dhabi has engaged in a very hostile policy to the Turkish president because of his refusal to recognize the bloody coup regime.

These relations continue to deteriorate and tension, most recently the Turkish authorities announced the arrest of two spies working for Abu Dhabi in a clear breach of good relations with the Turkish state.

The Ruler of Sharjah has good relations with President Erdogan so that the last visit of the Turkish President to the State was to the Emirate of Sharjah and at the invitation of the Ruler in 2011, where Abu Dhabi and did not approve the visit.

Citizens refer to some aspects of the strong relationship between the ruler of Sharjah and the Turkish state, with the opening of Sheikh Sultan recently the largest mosque in his emirate, built on the Ottoman style, which is a reference to the joint between Sharjah and Turkey, according to activists.

It is also a strong sign that the mosque was initiated by the Government of Sharjah in 2014, despite the beginning of tension in relations between Abu Dhabi and Ankara.

Observers say that no one can underestimate the importance of these signals, in view of Abu Dhabi incitement of Gulf channels to prevent broadcasting Turkish series, that is in the world of politics, there is no room for coincidence.

Observers say that the links and between Sharjah and Turkey, and between the Ruler of Sharjah and President Arugan, are sufficient reason for the absence of the Ruler of Sharjah from the Abu Dhabi meeting, in a “protest” gesture that. And Emiratis stand a strong stance with to the orientations of the ruler of Sharjah in return for the roles and trends that have kidnapped their state and our people away from the national, Islamic and even humanitarian depth, which Abu Dhabi selectively and partially practices for political considerations, according to observers.

American study: a comprehensive failure to the UAE defense industries