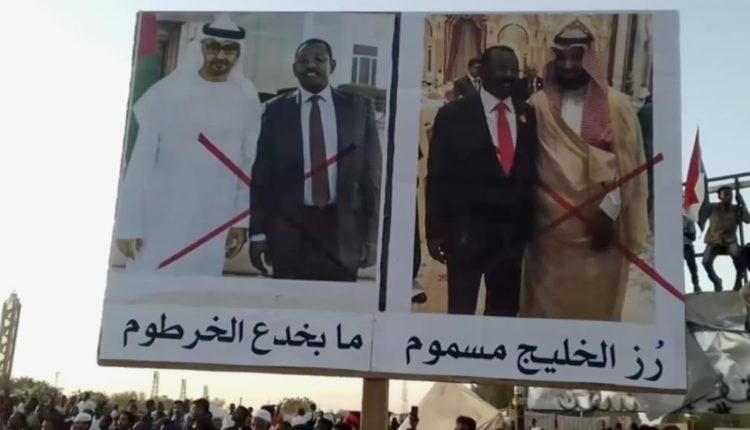 The British writer David Hearst, an analyst for the situation in Sudan said that observers of the efforts of Emiratis and Saudis, to impose themselves on Yemen, Egypt, Tunisia and Libya, knows what they are trying now, on the streets of Khartoum.

“What the Saudis and Emiratis absolutely do not want is for an independent, representative civilian government to stutter back to life in Sudan.” Hearst said in his article on the Middle East Eye.

He pointed out that the plan of Saudi Arabia and the UAE in the Sudan, consists of two things: “to buttress and arm the key men in the military who are negotiating with the protesters, and use the civilian leaders who emerge to clear all the Islamists out of the army, government, civil service and courts.”

The article reads as follows:

What the Saudis and Emiratis absolutely do not want is for an independent, representative civilian government to stutter back to life in Sudan

he month long sit-in of Sudan’s revolutionaries has carved a small district out of the centre of Khartoum, with its barricades, tents, art corner, transport system bringing fresh cohorts, and sound system.

The Youth of the Tunnel beating the rails of a railway bridge above and irons sheets below have become a sort of metronome for the revolution.

They refuse to leave until the armed forces hand power to a civilian government and are prepared to endure oven temperatures during Ramadan to keep the pressure up.

But it is the quieter sounds and backstage meetings that also matter.

Last week, a joint Saudi-Emirati delegation was reported to have arrived in Khartoum for meetings with members of Sudan’s transitional military council, although the names of members of the delegation have not been officially made public.

In Yemen, Egypt, Tunisia and Libya. the Emiratis and Saudis have sought to crush popular uprisings against long-entrenched leaders and the systems that they serve.

Right now, it’s Sudan’s turn. Their plan is two-fold: to buttress and arm the key men in the military who are negotiating with the protesters, and use the civilian leaders who emerge to clear all the Islamists out of the army, government, civil service and courts.

Once they achieve that, their Sudanese strongman takes over. It’s straight from the Egyptian or indeed the Libyan playbook. What they absolutely do not want is for an independent, representative civilian government to stutter back to life in Sudan.

They have one asset Sudan desperately needs, after the departure of most of its oil revenue, and that is money.

For decades, the only way of getting money transfers in and out of Sudan (American economic and trade sanctions were only lifted two years ago) was through two banks: one Saudi owned, the Faisal Islamic Bank of Sudan, and the other Emirati: National Bank of Abu Dhabi.

The end of sanctions failed to bring relief and even when the former president, Omar al-Bashir, came under strong domestic pressure to pull out Sudanese troops out of Yemen, where they constituted the bulk of the foreign fighters, he couldn’t because he needed the money.

Like most of Saudi’s neighbours, he was also fearful of the loss of income from the cohorts of Sudanese expats working in the kingdom.

The tentacles of Saudi and Emirati influence reach far and their links were forged long ago.

He quickly became Bashir’s right hand man. “I am not the director of President Al-Bashir’s office but rather his son,” he once said.

Al-Hussein used to shuttle back and forward between Saudi Arabia and the Emirates, and soon became known as the Saudis’ man in Sudan. He was credited with reviving the UAE presence in Sudan and for smoothing the way for a visit to the UAE by Bashir in 2016.

When Saudi Crown Prince Mohammed bin Salman needed a mentor in Africa, al-Hussein was the man. He also took credit for the decision to lift US sanctions after a visit to Washington to meet members of congress.

Al-Hussein was dismissed in dramatic circumstances. He was arrested at the airport as he was about to board a plane for Riyadh in June 2017 – one month after the official Qatari news agency was hacked, diplomatic ties were cut, and the Gulf blockade against Qatar started.

On him were thought to be documents which the Saudis and the Emiratis needed in their claim that Qatar supported terrorism.

Al-Hussein was allowed to leave Sudan, but today he is back.

Mohamed Hamdan Dagalo, better known by his nickname Hemeti, is another general whose past seems to have been wiped clean but who is central to the Emirati plan for Sudan.

Hemeti, the commander of the paramilitary group called the Rapid Support Forces, came to the attention of the sit-in as a good guy by claiming he had been ordered to clear the square of protesters irrespective of the cost of human life. He refused and put his commander under arrest, establishing a transitional military council.

Since then Hemeti has entered the hearts of the square, and as deputy head of the military council he is wielding influence on negotiations with the Sudanese Professionals Association ( SPA) and the Forces for the Declaration of Freedom and Change (FDFC) both of whom are negotiating on behalf of the protesters.

But should he really be there?

Hemeti has a very bloody past, as Sudan watcher Eric Reeves points out in his blog. The deputy leader of the military council is not one of the five Sudanese – including Bashir – for which the International Criminal Council (ICC) has issued arrest warrants over the massacre of unarmed villagers in Darfur.

But Human Rights Watch, which had documented serious crimes by the Rapid Support Forces in Darfur, said that Hemeti’s new role should not make him immune to accountability for the crimes of the forces he commanded.

The RSF became Bashir’s main instrument for suppressing the rebellion in Darfur, containing as it did a significant number of Janjaweed militias, and when Bashir realised he was in trouble in the last few months of his rule, the RSF became his praetorian guard.

“Reports consistently point to SAF Major General Abdual-Aziz and Mohamed Hamdan Dagolo, known as Hemiti, as RSF commanders, with General Ali al-Nasih al-Galla, a senior NISS official, retaining overall command and control,” the prosecutor of the ICC said in a report to the UN Security Council.

Hemeti built up a strong relationship with the Saudis and Emiratis in Yemen, as the RSF provided the core of Sudanese soldiers fighting the Houthis there. Hemeti sparked controversy by announcing that 412 soldiers had been killed in Yemen, which led to demands at home that they be withdrawn.

But they also have another tack. And that is the arm they are reaching out to different elements of the wide coalition of opposition figures, including Maryam Sadiq al-Mahdi, the deputy head of the Umma party and daughter of the former prime minister.

She admitted on television going to the UAE after the fall of Bashir, but said she was doing so to thank them for receiving her father when he was ousted in a coup.

Separately the New York Times has reported that five opposition Sudanese forces, including armed factions, had recently visited Abu Dhabi for talks about joining a military-led government. So many went after the fall of Bashir that it became known in Khartoum as a migration.

Soon after, Saudi Arabia and the UAE pledged to send $3bn in aid to Sudan.

There are obvious dangers to turning the Sudanese revolution into a proxy struggle between the Saudis and Emiratis supporting the generals and secular forces, with Turkey and Qatar backing the Islamists.

It will be up to those banging the rails on that railway bridge and refusing to move from the centre of Khartoum to avoid it.

Sudan has had its fair share of coups and civil wars. Islamists brought Bashir to power and then one faction regretted it.

The same happened with the Communists.

Dictators serve only themselves. This time, it is up to the protest movement to ensure that a genuinely representative democracy is established in the name of all trends and factions of the Sudanese people.

To exclude one is to put the replay of the past on a never-ending loop.

Otherwise they will be following the same script that was used to such effect in Egypt. Exactly the same could happen in Sudan. The next Sisi or Haftar of Sudan is already primed, ready and waiting.

The UAE drug smugglers networks are more than ever